Casumo Casino is home to some of the greatest games online and many of the top-rated titles are linked to massive progressive jackpots that can provide life-altering wins. Just a few days ago, one lucky winner was the recipient of one of these amazing jackpots, claiming a reward that was worth £6,373,373. The game that awarded this incredible win is one of the top player progressive games from Net Entertainment, Hall of Gods.

The winner, a casual player named Neil from Aberdeen, was playing some games at Casumo on his laptop from the comforts of home. His family was watching TV when he decided to start enjoying some Casumo games. He made a small initial deposit of just £30 to a new player account and started spinning on some of the slots. After getting a special bonus, Neil decided to test his luck on the Hall of Gods progressive game and that’s when his life changed.

From a single bet, he hit the multi-million payout and immediately phoned his parents to share the amazing news. The lucky winner plans to buy season tickets to Liverpool games and to purchase a holiday home in Tenerife for his parents.

This huge win is the fifth multi-million payout from a progressive game at Casumo this year and it is the largest win to ever be enjoyed at Casumo. While other jackpots site around £1.3 to £1.7 million, the Hall of Gods jackpot rose quickly and it was just perfect timing for Neil to start spinning those reels.

The Hall of Gods slot game is one of the most played progressive slots featured at Net Entertainment casinos like Casumo and it offers the chance to win amazing payouts, even if players are not as lucky as Neil to capture the progressive win. The game is a Norse themed slot that focuses on different gods. With a wild and a scatter, players will enjoy more payouts during the base game and will also benefit from some amazing bonus features.

There is an appealing free spin bonus round that is triggered by three or more scatters and the player can win up to 20 free spins, with all wins being tripled. The bonus game is what players will be hoping to trigger and this is how the latest multi-million payout was enjoyed. The bonus game is triggered with three hammer and shield icons on the reels, which will start a second screen bonus. The goal is to smash shields to reveal three matching rewards. Here, players can win coin payouts or can be the winner of the next progressive payout.

Casumo is proud to tell everyone about Neil’s recent win and since he is a new player, the casino is hoping he will continue to enjoy the games and amazing rewards that can be achieved with just a single wager. He is living proof that the jackpot games at Casumo can lead to dreams coming true. As a record-breaking win, Neil and his family are planning how to enjoy their new found wealth. 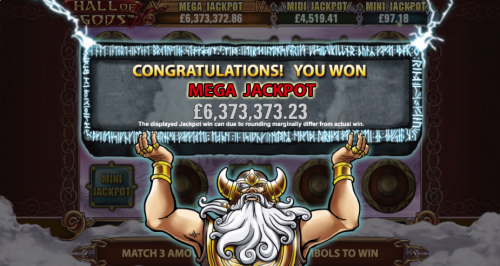