Arabian Nights video slot game might be several years old but remains to be one of our all-time favourite jackpot games. Regrettably, the game is not yet available on the mobile platform, meaning that you’ll have to play on the PC platform.

Arabian Nights slot machine will keep you spinning all night…

At Reelbonanza, we take the pride of dusting off vintage slot machine games and giving them the much-deserved attention. We refer to them as the reel relics, and the Arabian Nights video slot game is no exception.

Released in May 2013 by NetEnt, one of the top online slot providers, the game managed to secure itself the much-needed attention and has maintained to keep players interested over the years. While most people might want to argue that the game has successfully managed this feat due to its progressive jackpot, I’d personally beg to differ with this.

Having played this game on several occasions, I’ll proudly say that there’s more to the progressive jackpot when playing Arabian Nights slot machine. With a flexible betting range of between £0.01p – £27.00p on each spin, superb graphics and a captivating medieval theme that’s been based in the near east, this 5-reel by 10 paylines slot game would be a popular machine for any slot player, old or new. 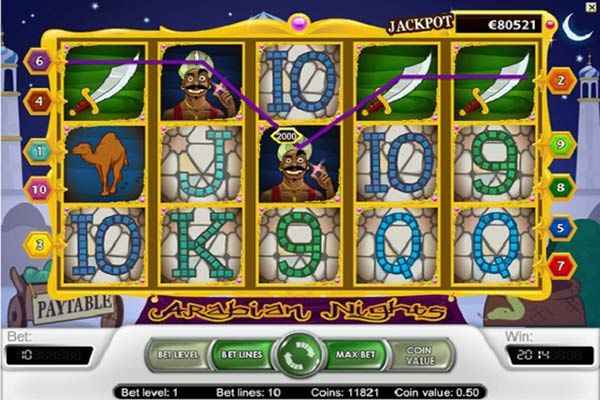 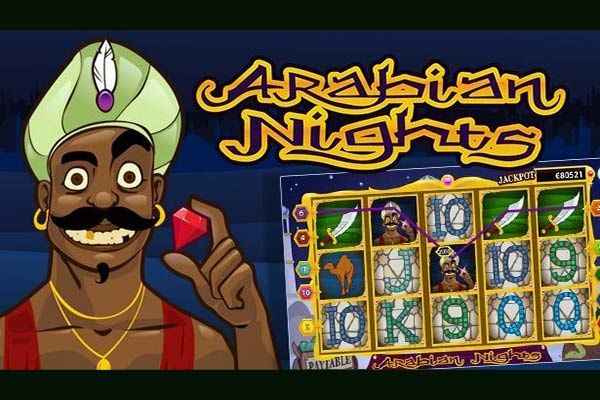 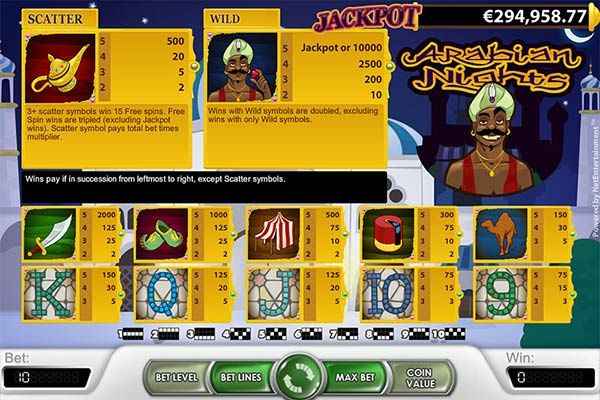 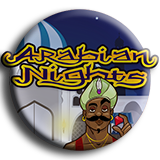 When someone mentions of Arabian Nights, what crosses your mind? The Middle East skyscrapers? The sultans dressed in their long kanzu’s? In the past, the country was a vast desert, full of people wandering in search of water for their camels. And as such, this game is based on the Arabians past life.

Arabian Nights video slot game is set in the hot sunny desert and features both ancient symbols and characters. The sky above the game’s reels is sizzling hot and bright, and you won’t fail to notice the unique architecture, the minarets on the side as well as the local tower. You’ll also see snakes that are waiting to be charmed outside the carts of melons and baskets, a common occurrence in most of the Arabian towns.

As for the graphics design, the game has simpler graphics as compared to what most of the other NetEnt slot games have nowadays. This is perhaps because the game was released at a time when the technological advancement of the slots graphics was still in its initial stages. Nonetheless, Arabian Nights cartoonish graphics isn’t a reason not to play this original slot, I’m positive that you are going to appreciate the old-fashioned theme. 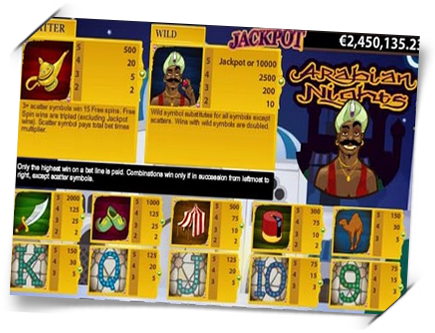 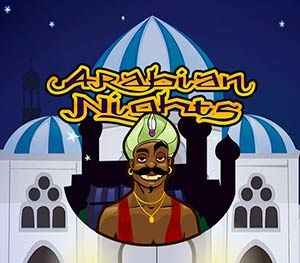 Arabian Nights main character has the highest payout out of all the symbols, it rewards you by substituting for all the other symbols, except for the scatter, to form winning combinations. If you get five of his images appearing anywhere on the reels, you automatically get the top prize – the Arabian Nights jackpot! On the other hand, the scatter symbol is a magical oil lamp.

Other symbols that you should come across when playing the game include a fez, Bedouin tents, a camel, a pair of Khussas and a Scimitar. Not sure what these are? The Khussas are a pair of Aladdin’s shoes, while the Scimitar is a curved sword. All the mentioned symbols are considered the high-value symbols.

Arabian Nights is a top slot machine game. Why? Well, if you’ve been a slot player for a long time, you’ll agree with me that most of the progressive jackpot games rarely have any in-game bonus rounds. Furthermore, those that have this provision will prevent you from winning the jackpot through the free spins game. However, with Arabian Nights slot machine game, this is totally opposite. It has a progressive jackpot as well as a bonus feature!

Get the lamp symbol to activate the free spins

Do you remember the scatter symbol that we said we’ll discuss more about it? This is the time! Arabian Night’s scatter symbol is the Aladdin’s Lamp, and is the first door towards the jackpot. As a scatter symbol, it can appear anywhere on the reels to activate the free spins bonus round. Just one symbol? No, not at all! You are required to obtain three or more scatter symbols to activate up to 15 free spins. Having already played the game, I must admit that NetEnt did a rather disappointing job with the free spins bonus round. The game is very dull and lacks the zest that a NetEnt slot game should have. On the brighter side, though, any winnings that you collect in this bonus round are subjected to a 3× multiplier.

What about this much mentioned Arabian Nights Jackpot?

You are simply required to log into any online casino that offers NetEnt games, choose Arabian Nights slots machine game and start playing. The Arabian Nights main character is the symbol you need to hit the jackpot, you’ll want to keep your eye on that. If you match five of this symbol on any reel, that is how you’ll be awarded the Arabian Nights Jackpot. 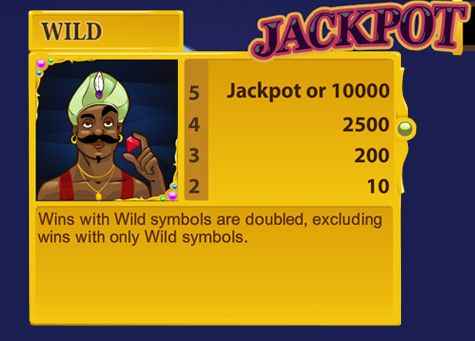 How do you play Arabian Nights Slot Machine?

Playing Arabian Nights Slot machine is straightforward. Visit any of the online casinos that offer Arabian Nights slot machine. In case you haven’t created an account with the site, ensure that you have one, and deposit money if you wish to play for real money. Click on the Arabian Nights slot game and choose the amount you wish to bet with. The minimum that you can bet with is £0.01p while the maximum is £27.00p on each spin and once you are satisfied with your choice, click on the spin button to start playing the game.

Can you play Arabian Nights on your mobile phone?

Unfortunately not! At the time of developing the game, the mobile platform wasn’t that advanced, and perhaps this is the reason why this game doesn’t have the mobile platform. However, I strongly believe with the game’s popularity among players, NetEnt is going to develop a mobile-friendly version.

The free game is there to help you familiarise yourself with the game and identify all the features mentioned in this Arabian Nights Slot review.

From the Arabian Nights slot review above, it’s evident that the game will take you on a magical journey, filled with mystery and suspense. In the game, you are bound to encounter plenty of symbols that identify the game with the Middle East in the ancient days. With its straightforward gameplay and simple yet very captivating graphics, this game is definitely going to leave a lasting impression on newbies. This doesn’t mean that the experienced players won’t find anything appealing in the game.

As a matter of fact, we like it and highly recommend it to pros since it promises you a number of features that you’ll find in the other slot machine games. While the game might seem a little juvenile on the outward, but scratching it a little deeper could prove to be rewarding with its juicy payouts and massive progressive jackpot.

Visit Casumo Casino, which is licensed on Malta and claim the £1200 deposit bonus and start playing Arabian Nights for a chance of winning the jackpot or the lucrative rewards associated with the game!