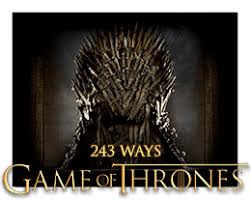 This slot game is a perfect choice for all hardcore Game of Thrones fans!

October 2014 was a special time for hardcore Game of Thrones fans, as Microgaming launched a new slot game by the same name. Their Game of Thrones slot became very popular and has remained so, and not only among those who loved the TV-show based on R. R. Martin’s books. Microgaming has done it again! This was not their first slot machine based on a popular TV show or film. With impressive graphics, 243 win ways, and an attractive layout.

The setup of the game is fairly simple. It comes with 5 reels, 15 lines or 243 win ways. You can choose to bet very small or to put more money on the game, so it is well adjusted to different budgets and playing styles. As you start the game, you will find yourself being entertained by real video clips from the TV series. This also serves as a way for people who weren’t previously familiar with GoT to learn more about it. We would not be surprised to hear that the show got new followers thanks to this slot from Microgaming.

If your focus is on your chances of winning, the RTP of the slot lands on 96%, which is quite good. This means that from every $100 bet on the slot, $96 will be paid out, though to whom and when we cannot tell.

Details for Game of Thrones 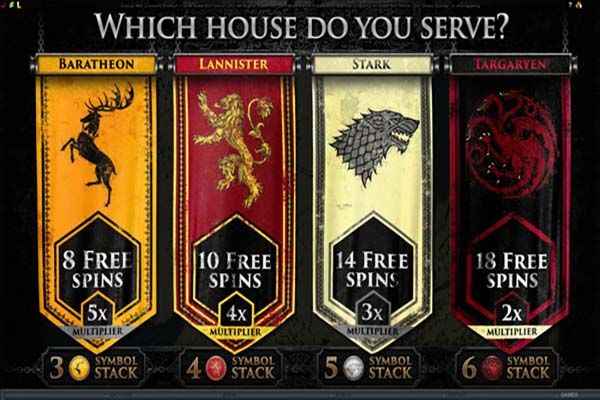 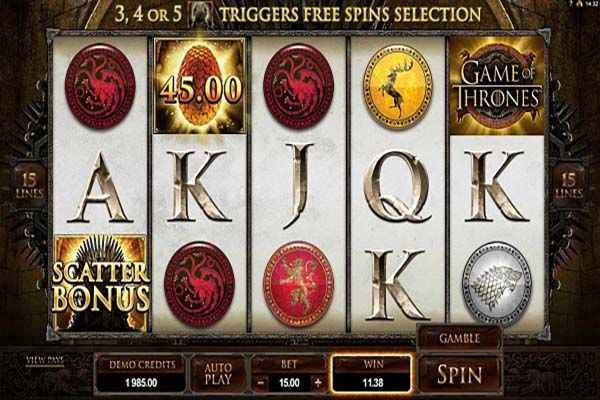 The theme is taken directly from the famous TV show, you’ll recognize the style and graphics right away. The TV show was one of the most expensive shows ever made, and you get the same feeling of high quality when you play this slot machine. Even if you’ve never read A Song of Ice and Fire or seen the HBO show, you will understand that something quite unique lies behind this game. Thanks to cooperation between Microgaming and the makers of GoT it was possible to incorporate actual movie clips and more into the slot. This makes it even more enjoyable and a real treat for those who have followed the show. The slot takes you into the fight for the Iron Throne. You will find the special world of Westeros right there on the reels. This slot offers a combination of classic storytelling and entertainment.

We think that Microgaming did an amazing job and highly recommend that you at least try a demo version of the game just to see how well the theme has been translated into slot gaming. The 15 bet lines are set so that you can’t really play around with them. You decide how much you want to bet on Game of Thrones and then you hit the spin button. Everything is clearly located under the reels and you don’t have to do much research to understand how to play. It is easy to set a number of coins and their value. You spin the reels and you win by getting a match of three symbols of the same kind. There are special effects that we will soon have a closer look at, but this summarizes the basic gameplay.

Like all Microgaming slots, Game of Thrones is controlled by a random number generator. Therefore you can never know when the winning combinations will pop up on the reels. All you can do is wish for good luck and let the reels spin. If you prefer to watch the rounds play out by themselves you can use the autoplay function.

When it comes to settings, Microgaming has made sure to give you plenty of choices. You can lower or raise the volume, keep track of the statistics and discover how you can really get into the workings of this game. Some players couldn’t care less, while others find this extremely interesting. All we can say is that it proves just how well-made this slot game is. Whether or not you have the full 243 win ways or 15 pay-lines depends on the casino you choose to play in. There are two versions of the slot, if the casino that you are playing at has both then you can pick between the two. 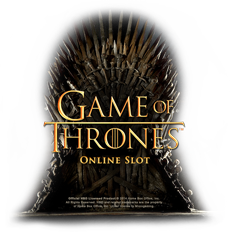 Symbols and pay-table in Game of Thrones slot

All in all this game has 10 symbols that spin around on the reels. These symbols are not particularly complicated in design. It should also be said that this slot is pretty much free of special effects and animations on the reels, making it easy on the eye. Similar to other Microgaming slots like Thunderstruck II, the wild symbol is simply the logo of the game, which in this case is the Game of Thrones logo.

You will see the 4 crests of each house, Targaryen, Stark, Lannister and Baratheon, fighting each other. They pay out in that order, so you will be happy to see many Targaryen symbols on the reels! Here there is no fantasy imaging, as the graphics come directly from the show. The scatter symbol is the Iron Throne, which again adds to the theme. Apart from these high paying symbols you will also get regular card deck symbols. There is the Ace, the King, the Queen, the Jack and the 10, which is pretty standard and to be expected from a Microgaming slot.

One could argue that the symbols are a bit too much in line with the show. It is almost as if Microgaming’s design team has cut and pasted them in. However, many see this as a great advantage since it makes the theme so much more authentic.

Something that makes it a lot of fun to play on the Game of Thrones slot is that it comes with nice bonus features. With the scatter symbol you can win more compared to the lower-paying symbols, thanks to a multiplier effect. Get 4 scatters and your winnings will be multiplied many times over. With 5 scatter symbols you get an amazing multiplier effect of 200 times your bet! Remember that this is only on the bonus feature round.

Scatters are important in this game because they will bring you to free spins rounds. You need to get 3 scatters to reach the free spins round. The bonus games are built in a structure according to the families from the show. Each house corresponds to a set of free spins and a multiplier. When you get more free spins the multiplier is smaller, and vice versa. For example:

Another cool feature is that you get to pick the house you want for free spins. Perhaps you want more rounds but a smaller multiplier effect, or the opposite. The choice is all yours! 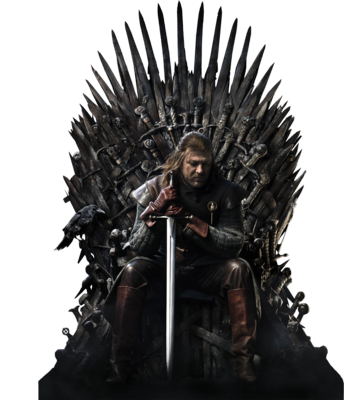 Play Microgaming’s Game of Thrones slot on your mobile

This game has been developed to also work perfectly on mobile devices. You can enjoy Microgaming’s Game of Thrones slot on mobiles with iOS, and Windows. You can also spin it on an iPad or other tablet devices with an internet connection.

It isn’t hard to understand why Game of Thrones is one of the most popular Microgaming slots. After all, the original TV show has millions of followers all over the world. The slot conveys the theme of the show in a beautiful way. If you love GoT, this is the slot game for you, and even if you haven’t seen the show, you will still see the charm of it. Try it for free in demo version or make a bet with a bonus in a good casino with the games from Microgaming.