This sensationally styled video slot game may be one of your new favourite games! Whether you prefer the old school slot games or you are a new school type of player, Twin Spin is one of the best video slot games around. Old school players will enjoy this game as it includes all the traditional symbols found in the video slot games including the bar, bell and the cherry icons that have become the symbolic icons for classic slot machines. With up to five reels, this video slot game will surely keep you entertained. The game’s “7” symbol is the welcoming symbol on the reels, as well as the glittering diamonds that announces any wins you may have. As a NetEnt slot, it does not only break the mold – but it also creates one. How? Boasting up to 243 ways to win if you hit the right symbols. 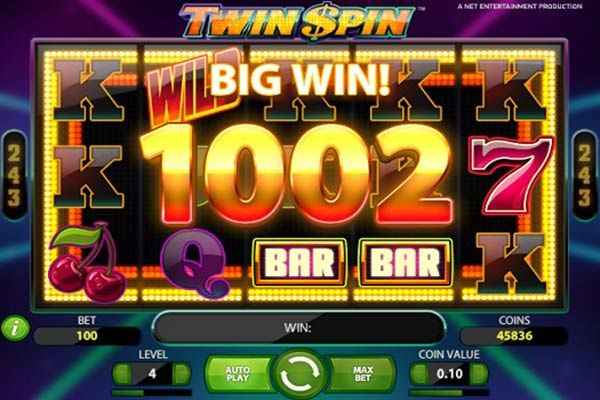 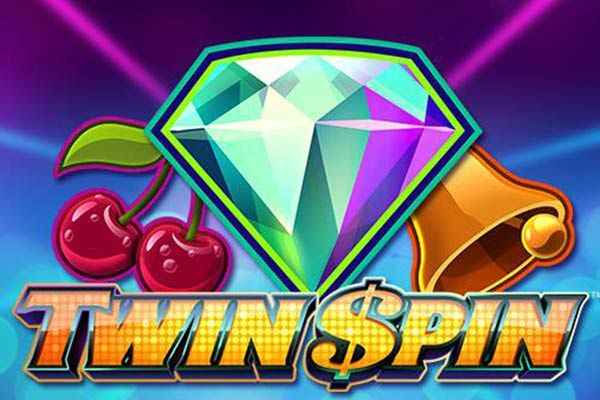 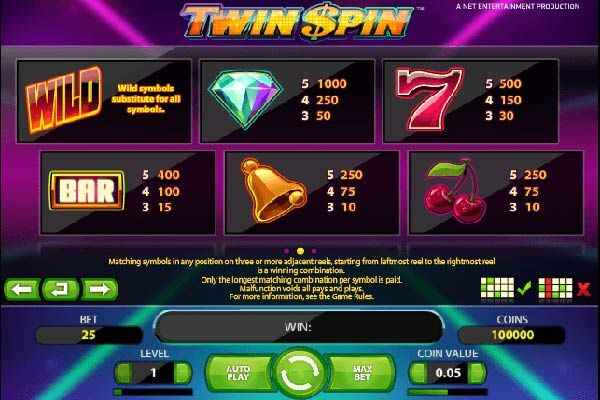 What makes this game a top priority to play online?

It’s no secret that most of the video slots players have the liking of wanting things to happen their way. You’ll be pleased to know that NetEnt strives to ensure that the games they produce truly meet your expectations. Twin Spin video slot is just a good example of this. It has successfully managed to blend the old and new themes of slot machines and complimented this with music and graphics that will keep you going as you play the game. The colour scheme is fairly simple to the eye as it features a fairly plain blue and purple background. The game’s Twin Spin logo is prominently situated at the top of the screen while little bright dots light up the background. 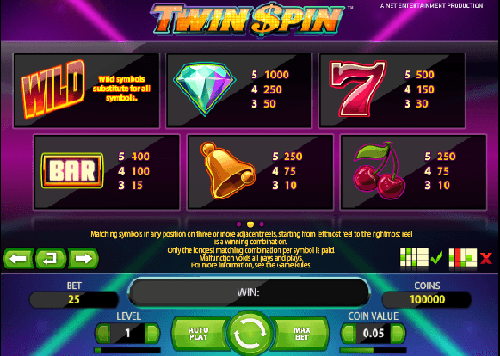 Just like the other online slots games that we’ve exhaustively reviewed in our slots guide page, Twin Spin features different in-game features. However, unlike the other games, it lacks the scatter symbol and bonus rounds. You are probably wondering, ‘What then makes this a game that I should play? Some people believe that video slot games are all about the free spins, bonus rounds and multipliers’. While this is true to some extent, each game comes with its perks and shortcomings.

The first unique feature is the 243 ways to win. This means to win a bet you only need to land three or more similar symbols on the game’s reels starting from the left-hand side of the screen. Thanks to this feature, you don’t need the wild substitution to form winning combinations!

This feature is what the game has been named after. Since it’s the basis of the game, players might overlook it as a simple concept, but in reality, it’s quite complicated. During the twin spin feature, two reels with identical symbols that are lying next to each other will be locked together to automatically boost your winning potential. Winnings will increase if it happens that locked reels are the first two on the video slot. The locked reels can also expand to cover 3, 4 or even 5 reels on each spin.

We mentioned that this game is similar to the other video slot games, but we didn’t mention that the similarity arises because of the wild symbol. Just like the norm for all other slot games, the wild in Twin Spin substitutes for all the other symbols to form winning combinations. However, in this game, it doesn’t reward as much as it would in the other games due to the 243 ways feature. The Wild Symbol in Twin Spin video slot game is the red WILD Logo. 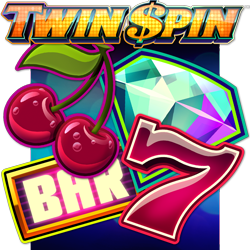 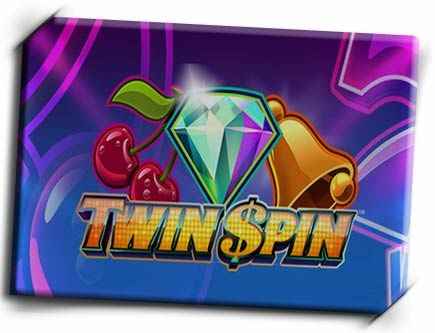 Twin Spin shuns the traditional paylines that are common in almost all other NetEnt video games in favour of 243 winning ways. As already mentioned, the game is a 5 reel by 3-row video slot and features old-school slot machine symbols such as playing cards, cherries, bars and diamonds. Since the game doesn’t have paylines, every time you decide to place a bet on the game you will be required to part with a minimum of 25 coins. Betting in this game is a matter of establishing your coin value in a bet level, and you can easily choose one that best suits you by clicking on the ‘–’ and ‘+’ buttons located in the ‘COIN VALUE’ and ‘LEVEL’ section respectively. Once you are satisfied with your choice, you have three choices of spinning that include:

We advise that you should maybe consider setting limits when you play online slot games, which include:

Twin Spin video slot is a true representation of a Vegas themed slot… Cherry duos, bright lights, and the iconic number 7 symbol all offer you remarkably high chances of winning the top price of €135,000. Moreover, it is the only NetEnt video slot game to have the highest number of ways to win – a figure that stands at 243 different ways!

Visit your favorite online casino and witness the two reels interlock on every spin you make and get a double lucky break now!