The reason I said this is because in my experience of playing video slot games, a game that has plenty of whistles and bells, tends to have poor gameplay. It’s as if the developers are trying to compensate for something. How wrong were we to judge the book by its cover! No sooner had we started to play the game than we were quickly drawn to this slot game. NetEnt, the company, taking the credit for developing this game, are really good at what they do, and that’s perhaps the reason why they have successfully managed to accomplish milestones where other companies have tried and failed.

Successfully managing to do a ‘Rock Out’ slot series is remarkable in itself, especially when you think of all the online casino games out there based on the monotonous ancient Egyptian theme or feature the Irish Leprechaun theme. Add in some HD graphics and a complimenting soundtrack on this game, and the result is an absorbing slot machine game. I’ll admit that I’m not a Guns N’ Roses fanatic, neither am I a rock fanatic but this game was enjoyable even for me.

Guns N’ Roses is part of NetEnt’s series of Rock-themed slots games leading the way for Jimi Hendrix and Motorhead Slot Machine game. However, it’s fair to say that it’s this slot machine game that stands out when mentioning the three games. 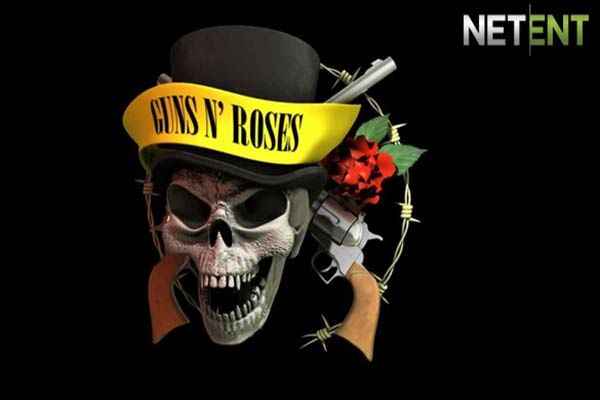 Designed with 5 reels, 3 rows and 20 paylines, you won’t fail to notice its unconventional grid level layout as compared to the other slot machine games. This coupled with the wild symbol that can expand, encore and legend free spins, a crowd-pleaser bonus round and a solo multiplier make this game what it is. On the downside, however, too many bonus rounds and in-game features might be confusing to some of the new players who aren’t familiar with this game.

Sometimes, fewer features can prove to be more. Nevertheless, you’ll soon catch up with all these features, especially if you play Guns N’ Roses free mode. Theme wise, Guns N’ Roses is what every rock fanatic would expect; the game is dark, rock-themed and set against a rock stage concert! What’s better is the fact that you get to spin the reels while listening to five all-time top tracks from the band, including fan favourites such as Sweet Child O’ Mine and November Rain. We have to agree that the game’s animations are superb and the music is awesome.

Literally, every online casino slot game has a wild symbol. However, not all the video slot machine games have expanding wilds. Besides having the wild symbol that substitutes for all the other symbols to form winning combinations, Guns N’ Roses also has the expanding wild, which once they complete substitutions, they cover an entire reel from left to right to form winning combinations. The wild symbol that you should look out for is the Guns N’ Roses logo. Guns N’ Roses has a scatter symbol that’s represented with the Record Bonus symbol. Once you get three or more of this symbols, you automatically activate different bonus games, which start with the bonus wheel.

In this bonus round, you are awarded 10 free spins during which one of the band members appears as an overlaid stacked Wild Symbol on reels 2, 3 and 4 on every spin. Moreover, the regular in-game symbols that feature a corresponding band member to the stacked symbol will act as a wild throughout this free spins game.

This is a free spins bonus round that is randomly activated. During the first free spin, you are awarded 1 stacked wild, which features a full-length design of one of Guns N’ Roses band members. Once this wild appears, you are going to be awarded 2 re-spins, which come with 2 stacked Wild reels. During the first spin of the legend spins, reel 3 turns into a stacked wild. Also, during the re-spin round, reels 1 and 5 turn into stacked reels during the 1st re-spin, while reels 2 and 4 both turn into stacked reels during the 2nd re-spin.

The crowd pleaser bonus round

This is a simple pick and click game that features 3 main levels, in which you stand a chance of being awarded free spin symbols, coins and an exciting +1 symbol. On the first level, you are awarded 3 clicks, and you also stand a chance of winning a minimum of 60 coins. It’s on this level that you can activate level 2, but only after you have no picks left.

To activate level 3, there shouldn’t be any picks left on levels 1, and 2 and all the possible instrument picks have been selected. Moreover, you have to have accumulated 300 coins from levels 1 and 2. If you successfully reach level 3, you stand a chance of higher multiplier. If you are awarded a total of 800 coins in this level, then your total win will be doubled, meaning that the 800 coins shall become 1,600.

The appetite for destruction wild feature

This is a wild overlay symbol that appears either in full or in part as a cross. The symbol can randomly appear anywhere to cover three reel positions at a go and substitute for any symbol to form a winning combination.

Usually appears alongside a win and if this happens, your win will be multiplied by a multiplier of between 4× and 10×. This feature can also multiply all the bet lines in one spin with the sum of your total win.

This is yet another unique feature of the game, and it’s usually activated once you have 3 or more Record bonus symbols. Once active, it gives you a chance of playing the additional bonus rounds in the game as follows. To get the most fun out of Guns N’ Roses slot machine game, we recommend that you play it on the PC platform. The game is evenly spread across the screen. It loads super-fast, and the navigation on this platform is easy. Nevertheless, if you are a mobile player, who enjoys playing on the move, you can also enjoy this game on the mobile platform. While the size and orientation of the game might vary from one device to another due to the size of the screen, the gameplay remains to be the same. It also loads the same across all platforms. Being a NetEnt slot machine game, the HTML5 coding has enabled the translation from the PC to mobile platform smoothly.

On a bet level of 1, different symbols have different payouts. They are described below:

With a coin range of between 0.01 and 1.00, which roughly translates to a bet range of between €0.02 up to €200, the slot game delivers what it promises to players – which is friendly betting levels for players of all budgets. This way, players can easily live the rock n’ roll lifestyle, through a compressed video slot game. With the free gameplay and exciting bonus rounds, you can play this game at Casumo online casino!